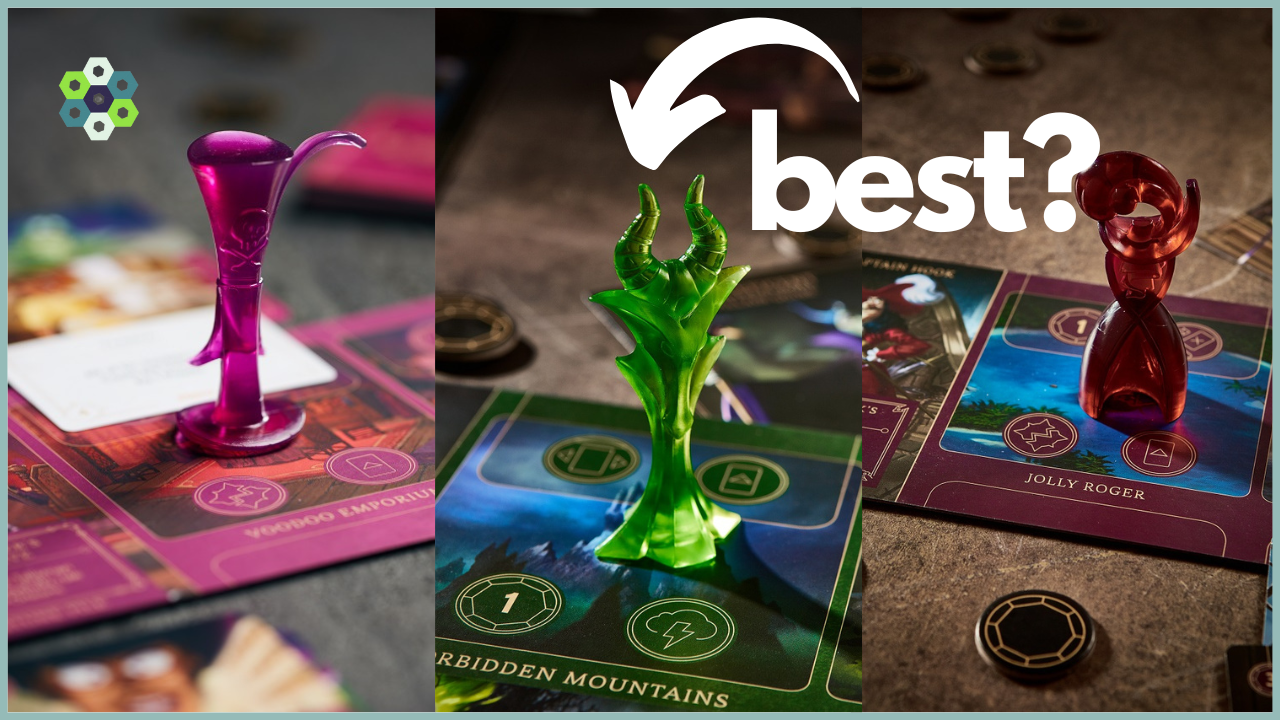 When you’re playing Villainous, there’s no dispute that some Villains are simply better than others. While each Villain has unique gameplay, exciting actions, and allies, a few offer players the upper hand over other players and a new spin on the board game’s classic playing style. But which Villains stand out among the rest of these infamous Disney characters?

We’ve chosen our top three Villainous Villains based on their gameplay, the advantage they give players, and the overall excitement these characters add to the game. So, if you want to switch up the characters you’re using during family game night, we’ve got you covered!

Maleficent isn’t just one of the greatest Villains straight out of the original game box. She’s probably one of the players’ most loved Villains overall. When you think of Maleficent, players familiar with the game probably have two words in mind: The Raven.

Yes, Maleficent is a great character to play thanks to her fun objectives and gameplay. But when she’s coupled with the Raven Ally card, this Villain is unstoppable! Maleficent has the power to be one of the fastest Villains in the game.

She can do this by using the Raven card, which allows her to perform an action from a location she isn’t currently on during her turn. This is true for most actions except those performed using Fate cards.

If a player is smart enough, they can use their extra actions to build endless amounts of power and store it up to use on Curses. Of course, Maleficent’s main objective is to start her turns with a Curse card on each of the locations on her board, so storing power can help players to end the game in a few strategically-planned moves once they’ve got the Raven card on their side.

Players can also build on Curses to protect other Cuse cards, which can save them from being hindered by too many Fate cards. All in all, Maleficent is a force to be reckoned with when it comes to Disney’s best Villainous Villains!

Captain Hook is another original Villain from the base game, and it’s not hard to see why he is one of the best Villains to play! Not only is Captain Hook extremely fun to play, but when players choose this character, they will have to use more strategy and planning than with other Villains.

Some Villains have objectives that are too easy to achieve or too complicated. Still, Captain Hook perfectly blends an easier objective with more dynamic gameplay. Players looking for a challenge will love using Captain Hook because – unlike other Villains – he has a well-balanced Villain deck and some of the most entertaining rules.

Captain Hook’s objective is to uncover Hangman’s Tree, which players can do by first finding Neverland’s Map. Then, players have to find Peter Pan and get him to the Jolly Roger location on the player board before finally defeating him once and for all!

But there’s a catch! Players will need to reserve their strength for the final battle with Pan, so forward-thinking and careful resource guarding is crucial if they want to win. Luckily, there are a ton of cards that allow players to add extra actions to specific locations, giving them the upper hand over other players.

Although Fate cards can slow Captain Hook down and make it more challenging for players to reach their final objective, Fate cards aren’t going to erase your Villain’s progress. Other Villains may have to restart their progress when hit with Fate cards, so this is a huge point in Hook’s favor!

With more dynamic and interactive gameplay than some of the other Villains (even those from one of the expansion packs!), picking Hook as one of the best Villainous Villains is a no-brainer.

Our third pick for the best Villainous Villain is, of course, the Dr who struck fear into every Disney-lover’s heart in The Princess and the Frog – Dr. Facilier! If you have no idea who we’re talking about, you may know him as the creepy Voodoo Man that tricks Price Naveen and turns him into a frog! Admittedly, it sparked one of the best Disney stories in recent years, so we’ll try to forgive him.

So, yes, our next pick is the Voodoo Man himself. Dr. Facilier can be found in the ‘Wicked to the Core’ expansion pack and comes with a new spin on Villainous gameplay. And with all his underhanded trickery, scheming, and deception, you know you’re in for a seriously wicked time when playing with this Villain!

The Dr starts with an imaginary pile of Fortune cards. As players take their turn, they will need to find the ‘Rule New Orleans’ card and add it to this deck. But other players won’t make it that easy for the sly Doctor to take over New Orleans and will use Fate cards against him to add to the Fortune deck.

Players who have chosen Dr. Facilier will need to once again find the ‘Rule New Orleans’ card as part of their objective, which becomes increasingly difficult as the game continues. This adds a new and exciting twist to the game, and it may be interesting to note that Dr. Facilier can often be the winning Villain – if players use his abilities and Villain cards to their advantage.

Dr. Facilier’s cards are also some of the cheapest to execute, giving players an advantage over their opponents. Because the actions are cheaper, players can do much more than their fellow Villains. Once you get the hang of this card, you could potentially end the game in a few short rounds of gameplay!