Is Villainous Good For Kids? 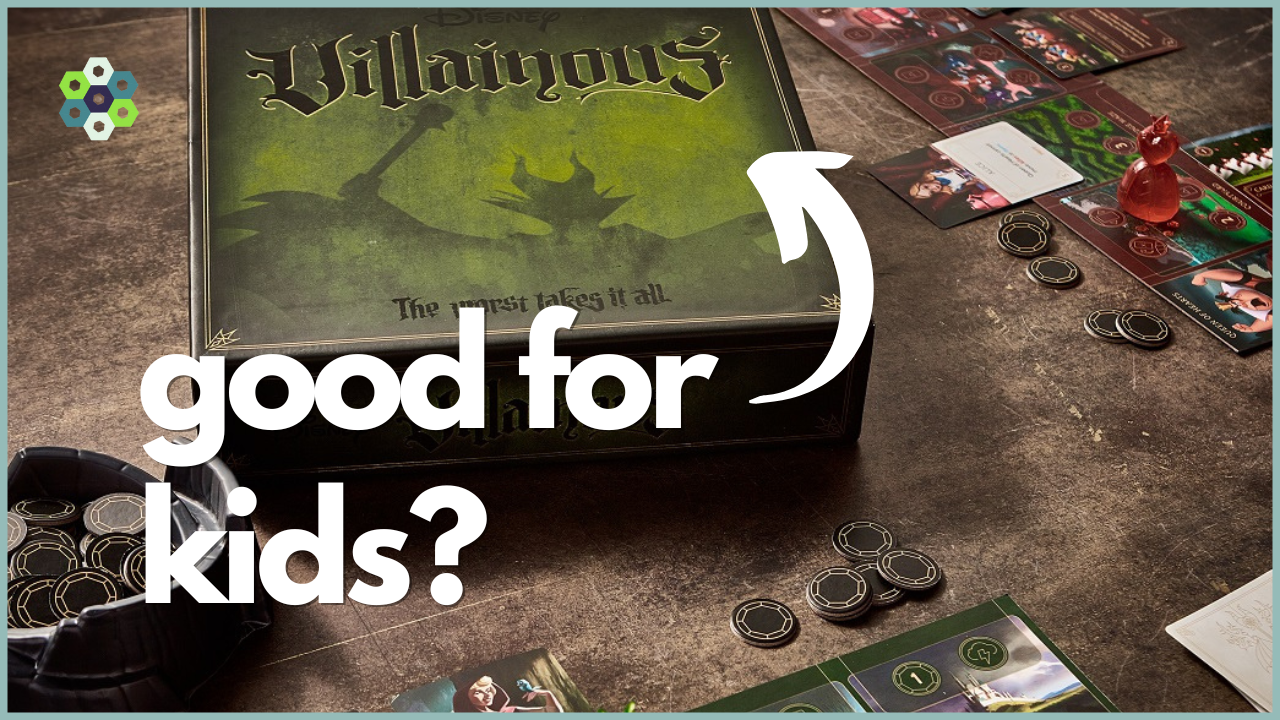 Disney Villainous is a riveting game where players can finally take control of their favorite Disney Villain in their quest to reign supreme. However, since strategizing is an important aspect of winning this game, many people have wondered whether Villainous is suitable for kids to play.

Villainous is a board game recommended for all Disney fans aged 10 and older. While this devious board game isn’t difficult to get the hang of, a fair bit of strategizing is involved. By playing Villainous, younger players can develop their visual, cognitive, and problem-solving skills.

If you have lingering questions about the age-appropriateness of Disney Villainous, we’ll discuss everything parents should know. Once we’ve explained how younger players can benefit from playing this board game, we’ll outline some tips for introducing kids to Villainous!

Villainous is widely regarded as one of the best board games for Disney fans. In this thrilling game, players can transform into their favorite Disney Villain and battle against other legendary wrongdoers. However, many people have wondered whether this game is suitable for kids.

You’ll be glad to know that Disney Villainous (including standalone editions and expansion packs) is recommended for all players aged ten and up. Since up to six people can play Villainous at once, this age restriction makes it the perfect board game for families with kids older than ten years.

Since all Villainous players use the same eight actions, the game is rather simple to learn and isn’t intimidating to new players. Ultimately, getting the hang of Villainous is all about understanding what each of the different actions entails and how to best utilize the cards in your hand. Many abilities and actions are also tailored to specific villains.

This design allows younger players to quickly understand the game’s basic mechanics without sacrificing fun for more serious and advanced players. After all, there’s a fair bit of strategizing and plotting that happens in this devious board game! As younger players familiarize themselves with the rules, they’ll become better at strategizing on their way to the top.

There are many benefits younger players can reap from playing this enthralling board game. Around the age of ten, when children enter their pre-teenager years, kids undergo significant mental and emotional changes. A captivating board game is a great way of helping your child develop during these formative years.

Disney Villainous will help teach younger players to follow instructions better and build their communication skills. Board games also teach younger players resilience by learning from their mistakes and failures. By anticipating the moves of other villains to foil their plans, children will also better understand how other people think.

While many of the core skills that board games promote are literacy skills, board games can also improve math skills by keeping track of scores. Overall, Villainous can be a fun tool to help your children develop their visual, perceptual, cognitive, and problem-solving skills.

Finally, Disney Villainous is the perfect way to spend time with loved ones. Since Villainous only takes between forty minutes and two hours to play to completion, it’s an easy way to carve out some family time in the busyness of daily life. In the following section, we’ll outline some tips for introducing younger players to this devious board game!

How To Introduce Younger Players To Villainous?

As we explained above, Villainous is more than a fun game for the whole family; it can be a helpful interactive learning tool for younger players. For those looking to introduce young players to the wicked fun of Disney Villainous, there are a few helpful tips that can be followed!

If you’re introducing new players to Villainous, you should help them understand the game’s rules. Ultimately, this will ensure that kids know the ins and outs of this devious game. Luckily, each Villainous game includes handy instructions, which can also be found online.

Before starting your first game, you should carefully read these instructions to ensure all players understand the rules. Luckily, the objective of this game is rather simple: each villain has a unique objective that needs to be fulfilled to win the game.

This tip is closely linked to the one discussed above. Villainous has many different components, including boards, villain cards, fate cards, tokens, and reference cards. Before you start playing, you must ensure that all players understand what these different cards do.

As you play, younger players will have a chance to experiment with these different game components and see how they work during the game. There are numerous video tutorials that guide you through the gameplay of Villainous, such as the following YouTube video!

Start By Playing Villainous In Teams

Since Villainous can be played by up to six people at once, it makes for the perfect family-friendly game. However, if your kids have just started playing Villainous, it might be wise to start by playing in teams first.

Villainous can be played by a minimum of two people (or two villains). To help kids familiarize themselves with the game’s rules, you can start by playing in teams of two. Ultimately, this gives you the perfect opportunity to help kids get the hang of playing Villainous!


When learning a new board game, teaching others how to play is a great way to reinforce your knowledge of the game. To help your kids become pros at playing Villainous, you should encourage them to play the game with friends unfamiliar with it.

By teaching their friends how to play Disney Villainous, your kids will better retain the game’s rules and mechanics. In future games against your kid, you might just find them correcting you about some of the rules!

All Disney fans aged 10 and up can play Disney Villainous. Even though this devious board game is easy to learn, it involves quite a lot of strategizing and plotting. Young players can develop their visual, cognitive, and problem-solving skills by playing Villainous with their family and friends.