Is Villainous Good For 2 Players? 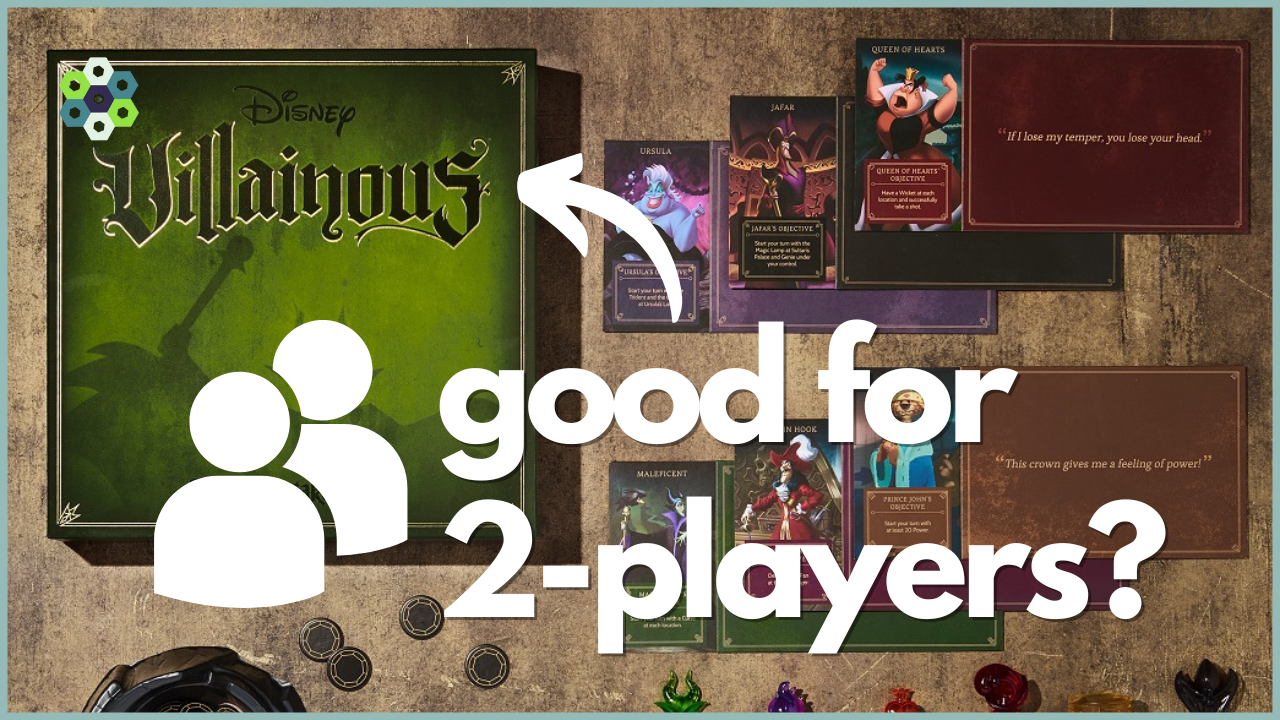 Villainous is a riveting board game for Disney fans of all ages, where players get to take on the roles of legendary Disney Villains. To win this game, players need to use their villain’s special abilities to overcome obstacles as they vie to complete their character’s main objective. However, many people have wondered whether Villainous is a good game for two players.

Disney Villainous can be played with between two and six players. This board game offers a fantastic two-player experience where players can battle head-to-head as their favorite Disney villains. This design lets players experiment with different play styles, character abilities, and strategies.

If you’re wondering what makes Villainous a thrilling two-player experience, we’ll explain everything you should know! You’ll come to find there are many advantages to playing this board game with just two players. You can even shake up a head-to-head match by using one of the fantastic expansion packs that bring more iconic villains into the fold.

Is Villainous A Good 2 Player Game?

Villainous is a riveting board game that lets players choose one of six iconic Disney villains to represent them, including Captain Hook and Maleficent. Despite having several characters to choose from, many people wonder whether Villainous can be played with only two players.

While it can be great fun to battle it out as a group when playing Villainous, it can be even more exciting to play this game head-to-head with two players. Playing this board game as a two-player game creates a focused and enjoyable experience where you can become more familiar with the different characters.

After all, each character has their own play style to master and unique objectives to fulfill. Going head-to-head with others in streamlined two-player games allows you to familiarize yourself with the various characters while experimenting with different character abilities and mechanics.

Despite the family-friendly packaging, this game has a lot of strategizing and plotting. By playing this game with just two players, you’ll be able to focus on your villain’s unique objective as you attempt to foil your opponent’s plans to reign supreme.

Ultimately, the Villainous base game makes for a fantastic two-player experience, where the true depths of this game are revealed as you play to give your chosen villain their own happy ending. If you’re ready to embrace the Villainous mindset to find the most effective path to your villain’s victory, you should go head-to-head with another legendary villain in a two-player game!

Each standalone version of Villainous is based on its respective cinematic universe. While the Marvel edition adds specialty cards that further align with character objectives, the Star Wars edition adds vehicles into the game. Like the base game, these standalone games are perfect for head-to-head matches in exciting new worlds.

Since these expansion packs are compatible with the base game, many people have wondered whether this increases the maximum player counts. Unfortunately, this isn’t the case. Even with the expansion packs, the Villainous base game can only accommodate a maximum of six players. If you added more players than this, the waiting time between turns would become unbearable!

Can You Play Villainous Expansion Packs Without The Base Game?

As we explained above, purchasing Villainous expansion packs does not increase the maximum player account. Even with the addition of these great expansion packs, Villainous remains a board game for up to six players. However, many Villainous fans have wondered whether it’s possible to play with the expansion backs without the base game.

In addition to this, each pack also includes instructions, villain cards, fate cards, tokens, and reference cards. Whether you have the Villainous base game or one of the expansion packs, you’ll be able to go head-to-head in riveting two-player games that truly test your ability to scheme and strategize!

Disney Villainous can be played by two to six players. With this board game, which offers a great two-player experience, players can go head-to-head as their favorite Disney villains. Players can experiment with different play styles, character abilities, and strategies when playing this way.