Video Games vs. Board Games: The Ultimate Showdown 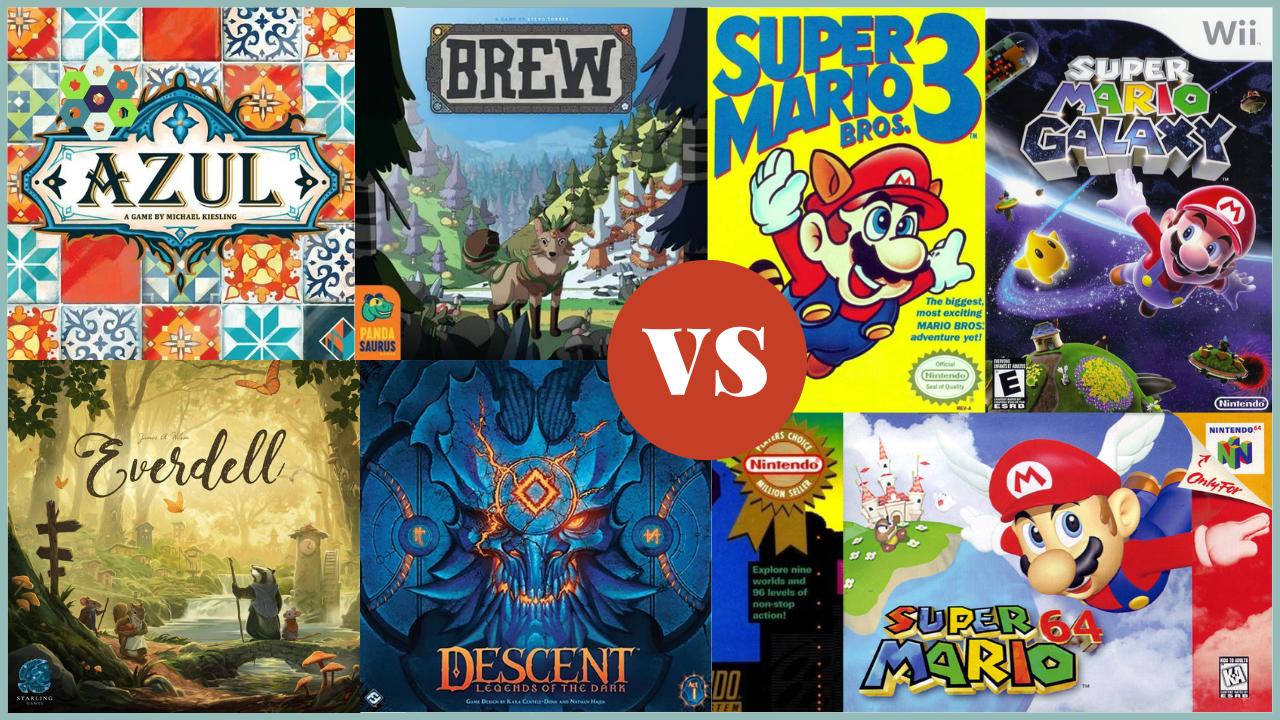 Even though Nonstop Tabletop is a dedicated Board Game Blog, it can be difficult not to write about our other favorite type of game, The Video Game. We grew up playing classic Nintendo and Sega games and switched over to the various iterations of Playstations and X-Boxes as we moved into adulthood. This writer still has a closet in the basement filled with Plastic Rock Band instruments…

While we love both, they’re competing for our sadly limited time and resources and we often have to choose between one or the other. It’s in that spirit that we’d like to playfully compare our favorite hobbies to determine the ultimate gaming hobby.

Let’s start at the beginning. Which medium has the brightest history?

Classic board games certainly have their charms. Despite being almost universally loathed today, games like Monopoly, Sorry! and The Game of Life (shudder) have a familiar retro comfort that can be hard to resist.

You may also remember your college days of Ramen Noodles and cheap beer fondly. Nostalgia can be cruel. Much like trying to relive your days of cheap processed foods and keg stands, playing these old games will leave you with a headache that won’t go away.

Board games have gotten much, much better and have entered a Golden Age (See our article on Why Board Games are So Trendy). Before 1990 or so, things were bleak: games relied more on luck than skill, players were eliminated early in games and forced to sit on the sidelines for hours and the dreaded Roll and Move mechanic was pervasive.

Though videogames stumbled out of the gates with an industry implosion that threatened to kill the medium entirely in the early 1980’s, they came roaring back to life mid-decade with the classic awesomeness of the NES, followed shortly by the everyone-wins rivalry between the SNES and the Sega Genesis. There was more gaming goodness than anyone had thought possible. We saw the likes of Mario, Sonic, Zelda, Final Fantasy, Metroid, Street Fighter, Tetris, Mega Man and so many more. And that’s before 3D came along with the Sony Playstation to change everything and usher in a whole new era of gaming.

More awesomeness than you can shake a stick at.

Tough we’re not quite as cynical about classic board games as some, we’ll easily take Super Mario Brothers 3 for a spin any day over the creaky mechanics of Monopoly and Life.

It’s hard not to sound like a an angry old man shouting “Get off of my lawn, whippersnappers!” with this one, but some things just need to be said. Video Games have taken two steps forward, just to take three steps backwards in the social realm.

The early days of video gaming were largely based on single and two-player experiences at most. Then we gradually saw the rise of 3 and 4-player games. Soon, people were linking multiple X-boxes together for massive 16-player dorm room Halo sessions.

Then online happened. While it was nice to play with friends over a headset, something is lost by not having your buddy on the couch next to you. Soon, instead of 16-player gatherings, FPS players were playing alone, fending off a barrage of sexist, homophobic and racist trolling from pre-pubescent monsters. And they still managed to always get the headshot.

The rise of videogame YouTube channels further compounded the problem. There are literally millions of kids out there who would rather watch someone play Minecraft than get together with friends and play it themselves.

Contrast that with Board Games, a medium that almost always requires the presence of others to fully enjoy (no disrespect to Solo Boardgamers out there). A six-pack of your favorite Sour Ale, a group of friends and a copy of Secret Hitler or Clank! spells for a fun, social evening.

The rise of Cooperative Games, Legacy Games and Social Deduction Games has led to even more gaming options for social fun. Dark Humor and Word-Based card games like Cards Against Humanity and Joking Hazard have opened up the hobby to a range of people who had never even considered playing board/card games before.

Video Games have gone through countless innovations over the years: analog controls, 3D graphics, motion controls, online play, socially networked games… the list goes on. But over the last couple of generations, it’s tough not to be hit with the sense that we’re being served up the same games over and over again with a shinier coat of paint. Just like the last two generations.

That’s not to say that we don’t appreciate the shinier coat of paint, and there are great indie games pushing boundaries out there, but given the tens of millions of dollars it takes to develop a AAA video game, things have become nearly as conservative and predictable as the reliable slate of sequels and franchises seen with Hollywood blockbusters.

Board Games on the other hand, are going through a Golden Age with new types of board games conceived, developed, and launched on Kickstarter on a daily basis. There is not enough time and too much excellent quality to even begin to sort through it all. (Don’t trust us? Check out Five-Thirty Eight’s excellent blog on the greatest game of all time, which lays out the case for the current tabletop renaissance.)

This one varies from user to user. It’s easy to see how someone could spend 200+ hours on an immense game like The Legend of Zelda: Breath of the Wild. It’s also easy to notice the progressively smaller campaign lengths of modern videogames, with many AAA titles now landing shy of the eight-hour mark.

That said, online play, downloadable content and a thriving used market provide great value and longevity for gamers looking to maximize entertainment hours per dollar spent. Picking a genre like RPGs can easily land 100+ hours out of each game with series like Final Fantasy, The Legend of Zelda and the brutally difficult Dark Souls. On top of that, used and older games tend to be incredibly affordable, offering even more replay for your hard-earned gaming dollar.

Board Games would have easily won this category years ago when a dusty game closet usually contained only tattered copies of Monopoly, Clue, and (the more racist than you remember) Guess Who were the only options on game night.

Now, however, Board Games are suffering from a glut of awesomeness. If you like a game, there’s an expansion or three to pick up. If not, there are four more games you picked up on your way home from work at the FLGS and another couple on the doorstep from Amazon.

This was a close one, and it may seem a little short-sighted to fault Board Games for having so much awesomeness to choose from that it limits replay value, but video games take the win here.

In recent years, Video Games have taken an increasingly story-driven, yet decidedly more twitch-based turn. The cerebral stalwarts, the JRPG, and the Strategy Game have both fallen out of favor. A quick comparison of the recent Final Fantasy XV to older entries like Final Fantasy VI or VII reveals the nature of the change. Turn-based strategy and customization have given way to fast, action-based combat.

While there are certainly valid reasons for this, it’s led to a sizable divide between digital games and their cardboard counterparts. Word Games, Puzzle Games, Area Control Games, Worker Placement Games, Hand Management Games, and on and on and on. All of these force players to flex mental muscles. It’s a little outside of what people think of as a board game these days, but good old-fashioned Chess is practically synonymous with brainpower.

And The Overall Winner Is… Board Games!

We know, we know. What do you expect from a Board Gaming Blog? We love video games (especially of the retro variety) and this was a lot closer than we expected. Though Board Games are at their all-time peak and maybe not even there yet, Video Games offer a longer, richer, and more storied back catalog and have reached the point where innovation has gradually lost out to iteration.

That may be less exciting, but it also means that the medium has more fully delivered on its full potential. It’s just more fun being there right now as Board Games strive to reach that peak. Either way, there’s a lot of fun to be had, so it’s game on!