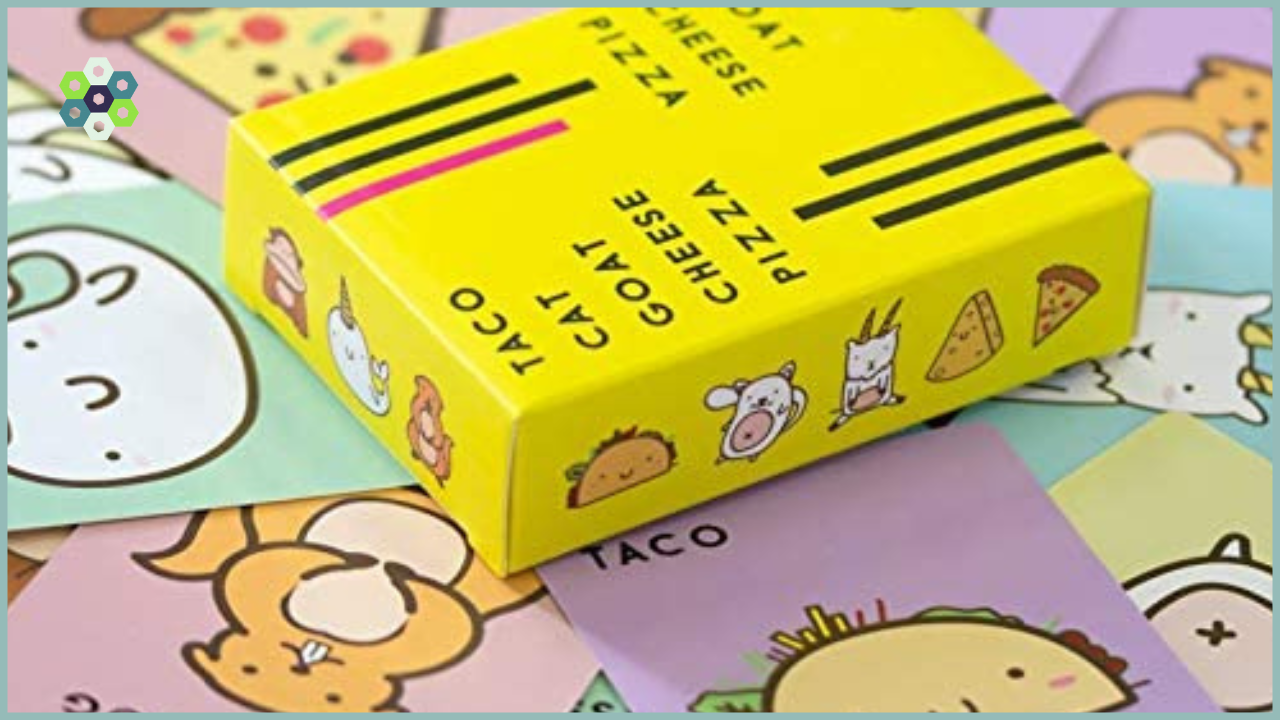 Warning: This game almost broke my finger. I may be exaggerating, but you might suggest other players trim their fingernails before getting started!

Recently, Dolphin Hat Games allowed us to test the prototype of their new children’s game, Taco Cat Goat Cheese Pizza. So what does a group of mature adults do with a new kid’s game? They send the kids outside and play the game themselves.  We need to be able to teach them how to play, right?

We must all be young at heart, because we took turns laying our top card in the center of the table all while chanting the words from the game title (Taco! Cat! Goat! Cheese! Pizza!). We were laughing hysterically, bemoaning our inability to stop accidentally reaching for the cards, and in some cases, nearing wounding other players (all in good fun!).

And yes, we finally let the kids play.  More on their thoughts in the “verdict” below. This addictive game is as unique as its name. It's a power-packed quick and simple party game.

Playing somewhat like slap-jack, war, and spoons combined, the entire deck of cards is dealt face down to all players. Each card in the deck has either a taco, cat, goat, cheese, pizza, or one of a few random items such as an adorable narwhal, groundhog, or gorilla.

The dealer starts the game by flipping over their top card, putting it in the middle of the table, and saying, “taco.” Play proceeds clockwise with each play also flipping over their top card and saying the title words in succession. After “taco” comes “cat” then “goat” and so on. Repeat.  This continues until a player’s “word” matches the card they have just laid down.

This is where finger-breaking begins. Once a card matches the word spoken by the player, everyone slaps their hand down onto the pile. The player whose hand is last and therefore on the top of the pile must add all of the cards to the bottom of their deck. Play begins again with the slow player starting over with “taco.”

The special narwhal, groundhog, and gorilla cards each have their own accompanying actions such as packing a horn with your hands, slapping with two hands, or beating your chest. Play continues until one player finishes a round with no cards and is declared the Supreme Hand Slapping Speed Queen. Those are my words, you’ll most likely call them The Winner.

Be careful, however, as there are other ways to get stuck with the pile of cards other than just being slow. Making a grab for the pile and pulling back when you realize you are wrong, lands you the pile to add to your desk. Peeking at your card will gain you the pile of cards. A mild punishment for cheaters, but since the players are most likely children, so what a good lesson!

This addictive game is as unique as its name. It's a power-packed quick and simple party game.

The kiddos unanimously loved this game. After playing I asked them to give me their feedback for this review. Answers included: It was great! It was fun and it made me think hard. Awesome!  I want to play again. Okay, so I need to work with them on descriptor words, but the game was a big hit. I was worried the slapping aspect might cause hard feelings among the siblings and cousins, but at least for this time, everyone was being a good sport.

Taco Cat Goat Cheese Pizza is fun as an appetizer for adults but falls short of something like Love Letter for cross-generational appeal. Make sure to get all of the drinks off of the table, as they may go flying with all of the hands slapping.

Ironically, sober adult play seems to be the game’s only weak spot. Rumor has it that this game has tested extremely well at bars as a drinking game. It’s exactly the sort of fun discriminating adults with alcohol-reduced inhibitions want and need. Someone make a YouTube video of drunken Taco Cat Goat Cheese Pizza!