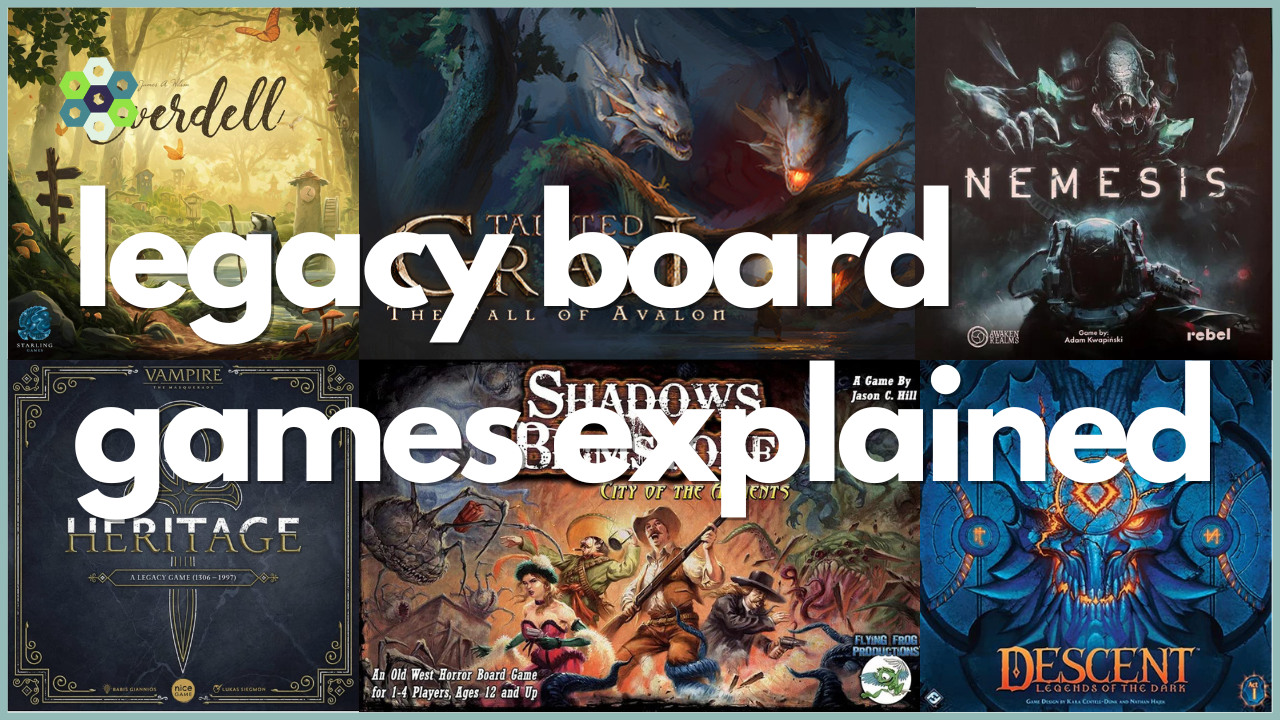 Writing on the board, tearing up cards, putting stickers in the rulebook. These are all things that would usually get you kicked out of game night. That is, unless you’re playing a Legacy game, in which case, that is exactly what you’re expected to do.

What is a Legacy Board Game?

A Legacy Game is an on-going or serialized board game that changes each time it is played. Player decisions lead to new rules being unlocked, cards being permanently destroyed and the board altered by being written on or plastered with stickers. Actions have consequences, which carry over into future games, giving every decision added weight. Often, a narrative element is added that makes a Legacy game feel more akin to a serialized TV show than a traditional table top experience. In short, decisions matter and permanently alter the game itself. The definition can vary, as the genre is still considered in its infancy, with multitudes of variations sure to follow.

Destroy The Cards? Are You Serious?

Blasphemy! If you’re the sort of board gamer who buys protective sleeves for cards or keeps an extra unopened copy of each Dominion expansion pack, this idea may sound like nails on a chalkboard. If the thought of pulling out a Sharpie and permanently defacing the game board makes you sick to your stomach, this might not be the right tabletop genre for you.

Give it a shot and it might play out differently than you expect. You draw a card that tells you to open a sealed package inside a box. Within are instructions that tell you that your character has been infected with an incurable virus and is now dead. Rip up the card. Throw it away. Don’t look back. JUST DO IT.

As you tear into the crisp new cardstock, emotions swirl. This feels wrong and yet somehow liberating. A surge of endorphins is released and it gets easier and easier each time. The next thing you know you’ve got a marked up board, a pile of trash and stickers everywhere. It’s exhilarating.

After all, board games are supposed to be experiences, not just material possessions, right? Not just a pristine cardboard box to sit on the shelf and collect dust. It’s easy to check out when you realize that you’re losing a game of Pandemic. There’s always next time. There’s always the big reset button of shuffling the cards and starting fresh. Not in Legacy games.

What’s Done Can Never Be Undone

Compare that game of Pandemic to a game of Pandemic Legacy. Even if you are doomed in a game of Pandemic Legacy, you’ll need to minimize the damages or you’ll suffer consequences. If your character is unlucky enough to be in a city when an outbreak occurs, you’ll have to place a scar sticker on her card, permanently altering play for every future game. Maybe now your virologist has PTSD and can no longer take a flight across the globe to find a cure for the latest infection. Or she might die. One more outbreak and London might go from a rioting city to an impassable fallen city. Those stickers don’t come off. Ever.

This is perhaps the secret ingredient of the Legacy genre. Everything you do reverberates and spills over into future games. When done well, this carries real weight. You’ll gasp when your favorite character dies. You’ll sweat when things get out of hand. You’ll reach a level of emotional involvement you never thought possible with a board game. You’ll truly care about the outcome.

Hand in hand with the ongoing consequences is a greatly increased storytelling aspect to most Legacy games. In Risk Legacy a group of factions fight for control of a new planet. Major cities are founded and fortified and someone may just end up with a nuclear weapon at some point. In Pandemic Legacy diseases will mutate, martial law will be declared and shocking revelations too spoilery to share will rock the game world.

Combine this increased focus on storytelling with the permanent consequences and you’re left with something akin to the emotional involvement available in serialized TV content that has been so effectively harnessed by shows from Breaking Bad to Game of Thrones. The possibilities seem endless and the surface has barely been scratched.

Disposable board games? In an era of overflowing landfills, imported water bottles and global political turmoil over climate change, is it really a good idea to encourage board games with components meant to be sent straight to the trash bin? Do you just throw the board away when you’re finished?

This idea is a bit misleading. First, Legacy games are meant to be played repeatedly, and they are. The narrative and drive to find out what happens next mean that most of these games will be played 10-20 times at least before the “end” is reached. Once that end is hit, players are left with a still-playable and completely unique version of the game shaped by their experiences.

Contrast that with a traditional board game that gets played a few times then collects dust in the closet for years. Be honest, how many times have you actually played The Castles of Burgundy? It’s a fun game, but I’m willing to bet it’s far less than 10-20 times. Paradoxically, Legacy players are likely to send less cardboard to the incinerator over the years than their traditional counterparts, in large part because of how much extra use each game is likely to get.

As you’ll notice in our earlier photo of Pandemic Legacy, which is blurred to avoid spoilers, Legacy Games are one of the only types of board games that can really be spoiled. We naively thought that we could post images from a game that was over a year old and about to get a sequel without trouble, especially since the images came from the first quarter of the game. After all, when a sequel nears release, the statute of limitations on spoilers has passed, right? Nobody has a right to get upset anymore when someone casually mentions that Darth Vader is Luke Skywalker’s father, right? Right?!?

We were wrong. Due to the time-consuming nature of board games and the staggered adoption rates, Legacy Games have high potential for spoilers. A big part of the fun is reading the narrative updates and opening new boxes to see what’s inside. Tread lightly when it comes to spoilers in these games. Trust us.

The History of Legacy Games

Rob Daviau, developer of Betrayal at the House on the Hill and Risk 2210 A.D. pioneered the idea of the Legacy game in 2011 with the release of Risk Legacy. What seemed like just another variant on the classic game of Risk, Risk Legacy was quite a different animal. Sealed boxes, destruction of cards, plot twists, all of the trappings that would define the genre were present.

Daviau wasn’t finished, though. Legacy games really came into their own with the release of Pandemic Legacy: Season 1 in 2015. Starting with the foundation of the wildly popular Pandemic, the Legacy version mutates and evolves in lock-step with the viruses that populate the game. The already innovative co-operative gameplay of the original fuses perfectly with the new, evolving game concept. The game won enough awards to make Meryl Streep jealous and is now firmly in the running for the title “Greatest Board Game of All Time” in most circles.

The following years, 2016 and 2017 would see the next evolution of the format: games based on original ideas rather than variants on existing Intellectual Properties. Notable entries included Gloomhaven as well as Daviau’s own SeaFall. Though neither has quite reached the heights of critical and commercial success of both seasons of Pandemic Legacy, they demonstrate the narrative and evolutionary possibilities offered when not tethered to an existing game design.

Even though they’ve been around for several years at this point, the very concept of Legacy games is in its infancy. I suspect that in a few years, Risk Legacy and Gloomhaven will seem bare-bones and basic compared to the classics to come that take the genre to new and unexplored territory.

There are wonderful things happening today with the merging of traditional board games with phone and computer-based apps. Throw augmented reality and video content into the mix and Legacy games are likely to be a hotbed of innovation for years to come. Games like Charterstone, with its 1-player option and focus on village-building mechanics give a feel for what could be possible as the genre expands and innovates.

In the more immediate future, some major releases are around the corner with Ultimate Werewolf Legacy leading the hype train for later this year. With dozens of other titles in the pipeline, it’s a guarantee that there will be a plethora of trashed cards, defaced boards and epic stories to come in the near future.