Is Villainous Hard To Play? 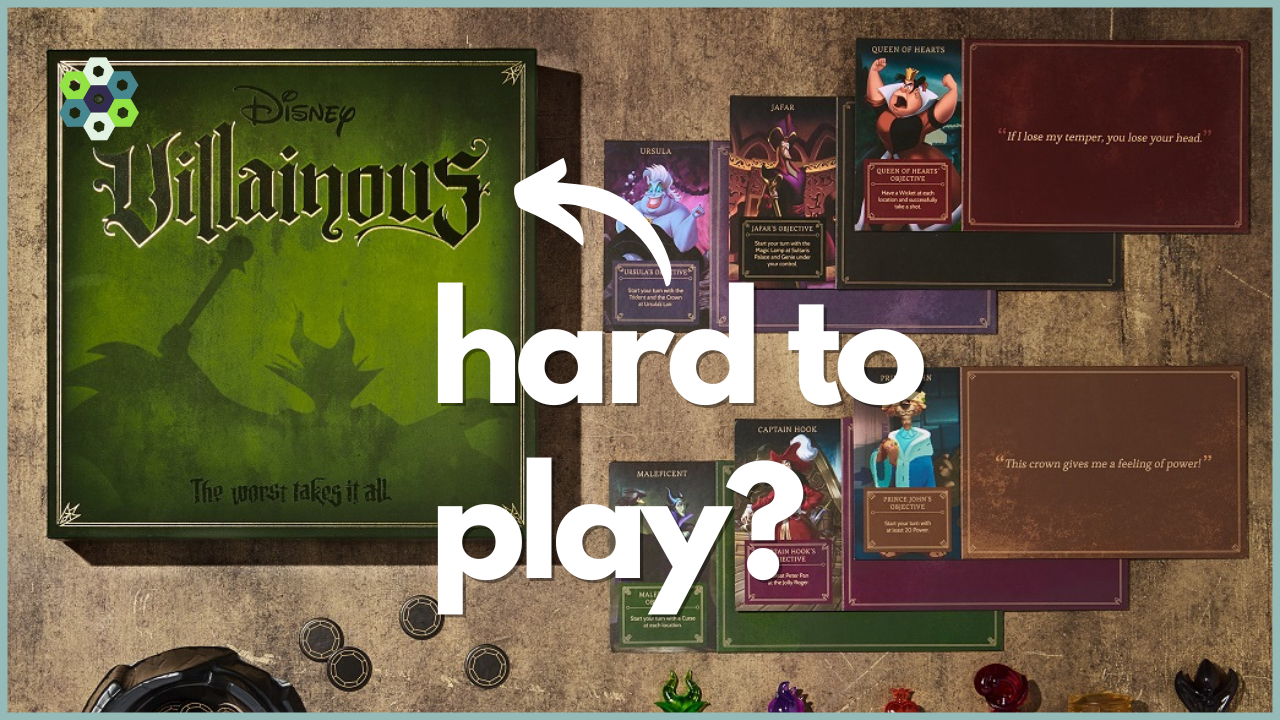 Villainous has quickly become a fun family board game to play with your friends and loved ones. And, with the assortment of well-known Disney Villains that children (and adults) love to hate, there’s something exciting about rooting for the bad guy for once. From Jafar to Ursula, players can choose to help one of the Villains triumph over the Disney Heroes! But how easy is it to play Villainous?

Disney’s Villainous board game is recommended for players aged ten and up. Villainous is easy to play for older children and adults, but younger children may need help to play if they can’t read. The game requires strategy, and each player will have their own rules and objectives.

Suppose you want to add a new board game to your collection for a family game night. In that case, you may already be considering Villainous. But before you purchase this game, it’s important to know how hard it is to play and whether the whole family can join in on the fun. Luckily, we’re here to answer your questions and explain how to play the game in a simplified and easy-to-understand way.

How Hard Is It To Learn How To Play Villainous?

Disney’s Villainous board game is super easy to play, and families will love competing against one another to become the most feared Disney Villain of all time! However, it’s important to note that Villainous may not be easy to play for younger children.

Villainous is recommended for players aged ten and up. The board game is categorized as a strategy game, where each player is assigned a Villain and their own set of rules and objectives. For example, suppose a player is taking on the role of Captain Hook. In that case, their objective is to triumph over Peter Pan once and for all at the Jolly Roger!

Players receive cards that detail how to play the game and what their following action will be. While the game is entertaining to play, it does require a bit of reading to win. Smaller children who can’t read or comprehend the meaning of their cards may struggle to understand the game’s rules. And if the rules aren’t followed closely, it defeats the purpose of the game.

Similarly, the game’s playtime will increase when you have more players. This can cause younger kids to get bored and lose interest in the game. While players take their turns, the other players must remain engaged and pay attention. They may sometimes get the opportunity to play on another player’s turn! If your child is too young to stay focused for long periods, they may struggle to play.

So, when you’re playing with younger children, they may need to team up with someone to help them understand their next move. However, they can still have tons of fun using the multi-colored player markers and checking out the detailed illustrations on the cards!

How To Play Disney’s Villainous Board Game

To help you better understand what we mean when we say that this game is centered around strategy, we’ve compiled the game’s rules into a simple guide. Hopefully, this can prove just how easy it is to get the hang of this fantastic board game!

There are six Villains to choose from, so the game is best played when there are more players. However, there can be as few as two players per game. The Villains are Captain Hook, Ursula, Jafar, Maleficent, Prince John, and the Queen of Hearts.

Before players can begin the game, they’ll need to pick their favorite Disney Villain. Once everyone has picked, they’ll receive their Villain marker to move around the board. Players also receive their own personal game board, a set of player cards specific to their Villain, and Fate cards.

One by one, players will take turns moving around their boards to different locations. In total, there are four locations on the board. Each location will help players achieve a specific objective – if they play their cards right! The locations also contain action symbols that tell players what kind of actions they can take or cards they can play.

It’s important to remember that some of a player’s cards can be played on another player’s turn, so listen carefully! These are known as Condition cards and can only be played when certain conditions are met. All in all, this is pretty easy to understand.

However, players must keep their wits about them to know when these conditions are being met. If they zone out on another player’s turn, they may miss their opportunity to use their Condition cards and get the upper hand!

The aim or objective of the game is to complete your Villain’s objectives before any of the other players. But this will require some keen listening and focus. Younger children may struggle to pay attention throughout the game, as some can go on for as long as an hour! So, if you want to get the little ones involved, you should team them up with an adult or older sibling.

If your Villain is first to complete their objectives, you can officially be declared the winner and take your proverbial seat on the Winner’s Throne! After all, you deserve to boast as the most feared and infamous Villain of all time!

Disney’s board game Villainous is one of the best board games to break out for a family game night. With a cast of well-known Villains and Heroes and familiar locations and themes, kids and adults will love getting to put themselves in the Villains’ shoes for once!

While it may take some practice, reading, patience, and just a little strategy, adults and older children should be able to learn to play this game in no time! But that doesn’t mean the little ones can’t join in on the fun, too! You can pair younger children with an adult or older sibling to help them reach their goals, making game night fun for the whole family.