Is Villainous A Fun Game? 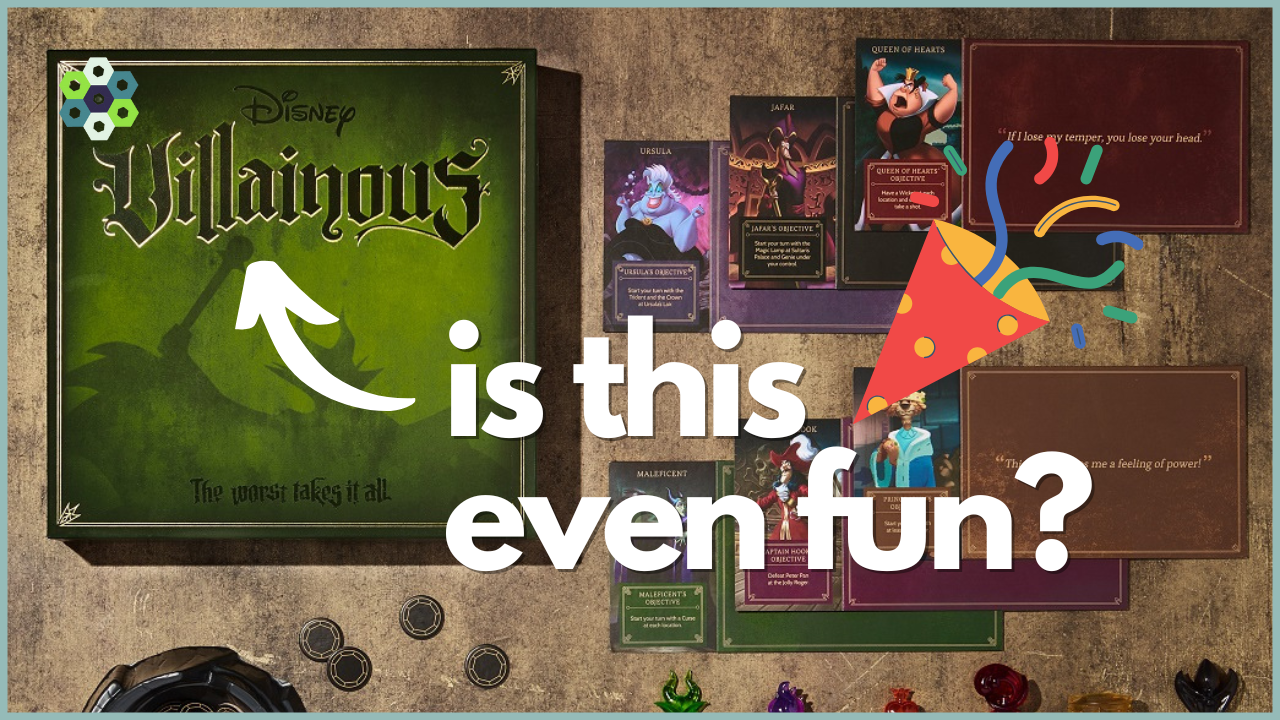 Given that board games have rapidly increased in popularity and complexity over the years, it’s no surprise that major companies and recognized IPs are partnering with game developers to create new and exciting games! So is Villainous a fun game to play?

Villainous is a reasonably deep strategy board game based on the Disney IP’s roster of iconic movie villains. Players play as their favorite Disney villains and must achieve their unique objective of beating opposition players. Consequently, Villainous is perfect for Disney fans of all ages!

To better understand why Villainous is a fun and engaging board game for both beginner and veteran players, we will explore the gameplay, themes, and different ways to play Villainous in greater detail below:

What Is The Goal Of Villainous?

The main Villainous game (see below for discussions on expansions and standalone versions) tasks players with choosing one of six different Disney villains to play as, as represented by colorful and stylized figurines:

Once a player has chosen their character, they are given their unique board, deck of cards, and objectives in order to beat their opponents, (such as Captain Hook needing to defeat Peter Pan at the Jolly Rodger, meaning the objectives and aesthetics follow the stories of the characters!)

Although using single unique boards and cards may feel like you are playing with yourself rather than other players, rest assured that the inclusion of the “Fate” deck means that players can strategically hinder the process of others and slow their progress.

Consequently, paying close attention to the other teams and players is vital to ensure they do not complete their objectives before you do!

However, while Villainous can be a lot of fun, it can also be a bit stressful, intense, and frustrating. Therefore, like all board games, it is a good idea to take regular breaks between rounds and to remember it’s just a game!

Does Villainous Have A Lot Of Depth?

Villainous has a surprising amount of depth to its strategy without being overwhelming to new or beginner players. The inclusion of six villains with the base game means there are six different play styles to experiment with, enjoy, and master.

While it is fun to play different characters, some character abilities may suit certain play styles over others. Thus, serious players should take the time to master their favorite characters if they want to remain competitive, while not neglecting to learn other characters’ abilities.

However, despite the game’s depth and unique character mechanics, a common criticism of the base game is that players will quickly learn and master the strategies of all six characters. Thus the game becomes less predictable as counterplays and strategies become easier.

Fortunately, there are additional characters and rules sets that can further improve the complexity of the base game, (see below for discussions on the different versions of Villainous.)

Are There Different Versions Of Villainous?

At the time of writing, there are currently five expansion packs for Villainous and two standalone Villainous games:

The five Disney Villainous expansion sets will be grouped together for ease of reference. These expansion sets are all compatible with the base game and add fifteen new villains to play:

Marvel Villainous: Infinite Power is a standalone version of Villainous, making it incompatible with the Disney: Villainous base game. The game is centered on the characters and themes of the Marvel universe, allowing players to take control of five iconic villains from the Marvel franchise:

Further additions to the standalone version include “Specialty Cards.” These unique cards further align with each character’s objectives, stories, and play styles, thus adding further complexity and strategic depth compared to the base game.

Star Wars Villainous: Power of the Dark Side

Star Wars Villainous: Power of the Dark Side is a standalone version of Villainous making it incompatible with the Disney: Villainous base game. The game is centered on the characters and themes of the Star Wars universe, allowing players to take control of five iconic villains from the Star Wars franchise:

Similar to Marvel Villainous: Infinite Power, Star Wars Villainous: Power of the Dark Side adds further complexity compared to the base Villainous game with the inclusion of vehicles and the “Ambition” mechanic.

Is Villainous Fun For All Ages?

Although Villainous’ Disney themes make it the perfect board game for the whole family to enjoy, the depth of strategy and extensive readings means that the game is best suited for pre-teens ages ten and up.

However, that’s not to say younger players can’t join in! Instead, younger players may need to be teamed up with older players to help them learn the strategies and rules of characters before they can comfortably play Villainous by themselves.

In conclusion, the rise of various IPs venturing into the board game market has often proved mixed results (often being nothing more than an aesthetic choice over a preexisting board game.)

Villainous is an excellent board game that incorporates the themes and stories of Disney and its characters into deep strategic gameplay that the whole family can enjoy!