Is Gloomhaven Hard To Learn? 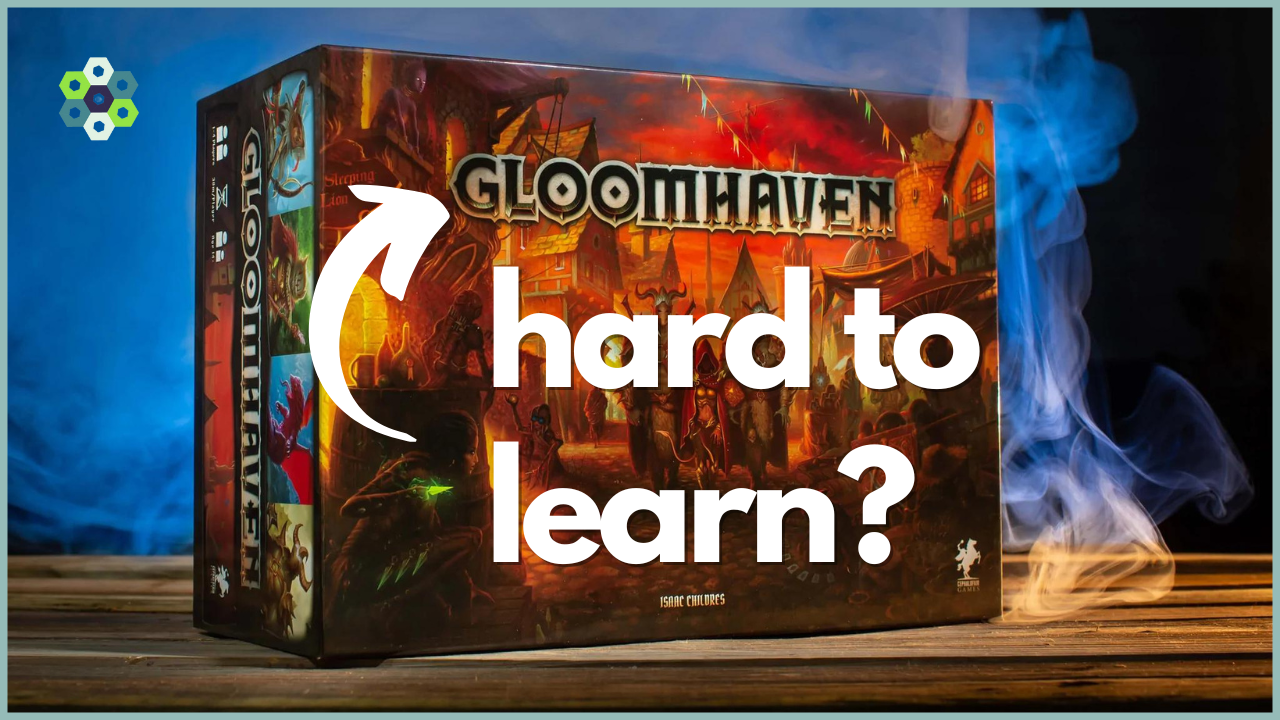 So, you’re ready to give in to your nagging friends who have been begging you to go dungeon crawling in Gloomhaven with them. Or maybe you’re considering buying it as the next game for your group, but you have some reservations. Most significantly, you’re concerned that Gloomhaven is very hard to learn.

Gloomhaven is a massive game with multiple different mechanics, which can be daunting to learn. Fortunately, the game is reasonably compressed when you first start a new game. It then grows and expands in complexity as players progress and become more familiar with the rules and systems.

If the sheer size of the box scares you, don’t worry, you’re definitely not alone. However, my own group managed something extraordinary: We successfully taught our significant others not only to play the game but to really enjoy it. And if they can learn, so can you.

What Makes Gloomhaven Hard To Learn?

There can be no doubt that Gloomhaven is significantly more challenging to learn than your average board game. But before you ask, no, the creator wasn’t going out of his way to prove his superior nerd intellect and create a game that would raise an army of like-minded geniuses.

Essentially what Isaac Childers created is a table-top version of a classic PC-based role-playing game (RPG). So instead of thinking of Gloomhaven as just a board game, you should think of it as Skyrim or Diablo, but the analog version.

Put differently, when you play a game like Skyrim on a computer, there are a lot of background mechanics constantly running without you even noticing.

For example, if you click to attack a target, your weapon’s base damage is added to the strength rating of your character. Then any other magical effects are added to give you the attack damage. After that, your opponent’s armor, defensive abilities, etc., are all subtracted from your attack, and the difference is the damage you do.

Gloomhaven also uses those RPG mechanics, but they are tracked and calculated by the player, not by a computer. It’s really this aspect that can make Gloomhaven a little more challenging to learn.

But before you run away and give up, give me a chance. I will use my wand of radiant hope and explain to you why Gloomhaven, at its core, is pretty straightforward.

Gloomhaven Is A Card Game

If you break it right down, Gloomhaven is really just a card game. And a relatively simple one at that.

Each player has a deck of cards that represents their stamina. If you run out of cards, you become ‘exhausted’ and die. Every card has two actions, one on top and one at the bottom. Most of the time, the top action is an attack, while the bottom action is a movement (there are several exceptions, but this is the general layout).

You must select two cards during your turn and then play the top action from one card and the bottom action from the other. You then draw a modifier card, which adds an element of chance by either strengthening or weakening your attack.

The two cards you have just used are then placed in a discard pile. The discarded pile can then be refreshed by forfeiting a turn and losing one card for the rest of the game. This process is known as ‘resting,’ and it’s the way that you manage your hand of cards and try to prevent exhaustion.

Once you understand that the very core of Gloomhaven is in that two-card-per-turn system, then it’s easier to understand where all of the other various mechanics fall into place.

Their primary function is to modify either the actions of your cards or your character’s passive abilities.

For example, weapons allow your attacks to deal more damage, add effects like poison or even add additional targets to your attack. On the other hand, boots and shoes enhance your character’s movement. So, these two item classes affect the top and bottom actions of the cards you play.

Other items like armor and helmets mostly do what you expect them to do by granting you passive defensive abilities. However, certain items give you extraordinary added abilities. I won’t specify any of those here because they are accessed later in the game, and I don’t like spoiling surprises.

Over and above the various items that you can equip, there are also six elements in the game. These elements are fire, ice, air, earth, light, and dark. They are activated by certain action cards, typically as a side effect of an attack or movement action.

When activated, they remain available to be used for two rounds, after which they return to a dormant state. They can be used (or “consumed”) by any player who plays a card with the option to consume a specific element, and doing so enhances the action.

OK, I may be using the word “easy” a bit loosely. However, as you start playing Gloomhaven, you’ll see how quickly you grasp certain aspects, while others will still make you run to Old Man Google for the answers.

The enemies in Gloomhaven occupy both those spaces. Their basic attack actions really are pretty simple to understand. Each enemy has a passive list of abilities, for example, three movements and five melee attack damage.

During their turn, you flip a card from their deck, which alters those passive abilities, either enhancing them or decreasing them. After that, you turn a modifier card which further increases or decreases the attack effect before it lands on your character.

Simple enough. However, it tends to get a little complicated when multiple enemies are on the board, and you have to keep close, mechanical track of each one’s turn and damage.

This can become admin intensive and require a fair deal of focus. So what my group does is that we each get assigned an enemy class to manage.

Those in the group that can’t focus on more than one thing at a time either don’t get an enemy to manage or get assigned the least complex class.

Gloomhaven Eases You In

When I started playing Gloomhaven, I jumped into an existing game with a group about halfway through the campaign. It felt a bit like jumping into an icy lake. The cold shock nearly made me hyperventilate to the point of system failure.

The reason is that although Gloomhaven is a huge game, it’s designed so that you aren’t faced with all the items, enemies, and characters from the beginning. When you start a new campaign, your choices are extremely limited, which is fantastic for teaching you the game.

As an example, Gloomhaven has 17 character classes in total, but when you first start a new campaign, you and your group have to choose characters from a pool of only six.

Once you have chosen your character, you also won’t have access to its full range of complex abilities. Instead, you gain access to these as your character (and, by extension, you) gain experience.

The same goes for items. There are only a handful of potions, armor, and weapons to choose from initially. Then, as your party progresses through the game, more items become available, and you instinctively can tell which will work for your character and which ones won’t.

Start With Jaws Of The Lion

One of the expansions for Gloomhaven is called “Jaws of the Lion,” and as a new player, this should be your starting point. Jaws is actually less of an expansion and more of a condensed version of Gloomhaven.

However, what makes it fantastic is that it has a built-in tutorial that walks you through a few missions and helps you understand the rules of the game. It also has fewer moving pieces to keep track of.

Once you’re done with Jaws, you’ll be more than ready to jump into Gloomhaven.

There Is A Giant Gloomhaven Support Community

My group has played through the entire Gloomhaven campaign more than once and one of the expansions. So hopefully, you can find some solace when I tell you that we still turn to google and the Gloomhaven community for input.

See, at some point, you will launch into an earth-bending attack that combines elements, items, and abilities in such a way that you risk accidentally cheating. In these cases, we generally turn to the community, where Isaac himself is active, to settle disputes.

It’s hard for me to think of an example for this post, but I can promise you that you will know such a case when your group is faced with it. They are pretty obvious. However, the point is that if you are ever unsure, you only need to ask, and people will jump to help you.

Gloomhaven is more challenging to learn than the typical board game because it is vast and has many moving parts and mechanics. However, as a new player, you are introduced to the game piece by piece, which makes it easier to learn. It also means that the game continues to challenge you as you grow as a player.