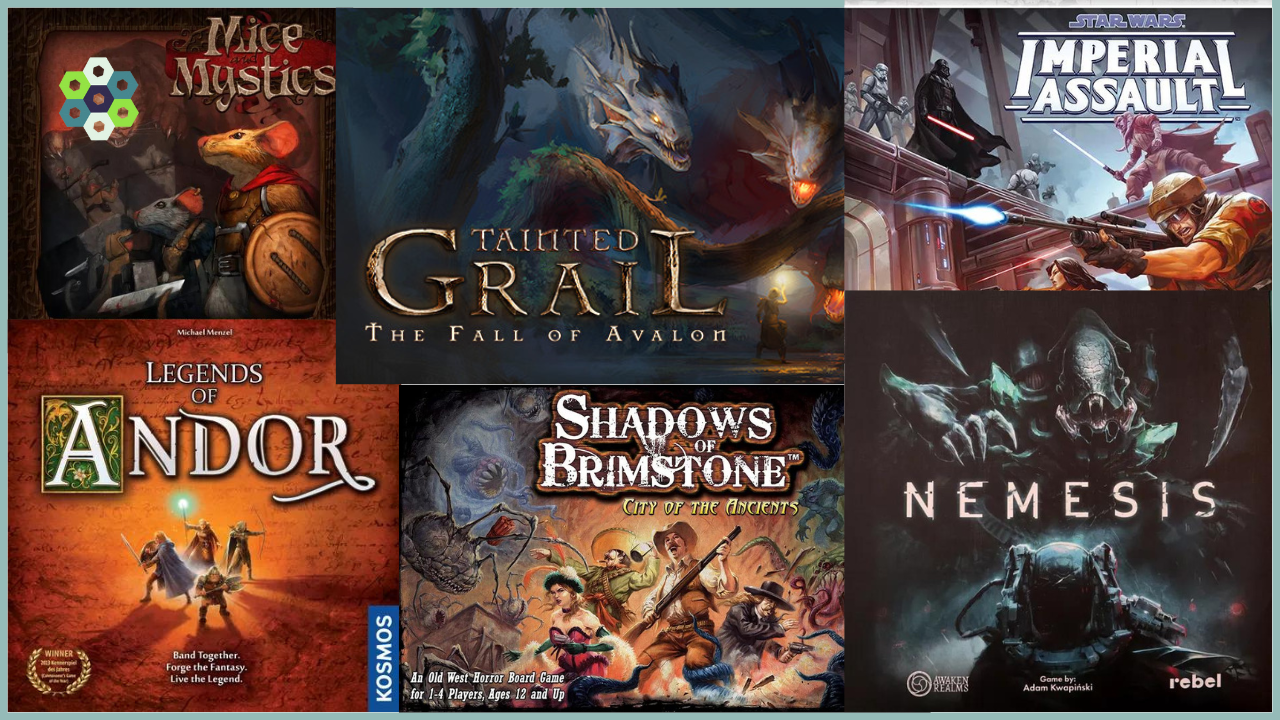 Gloomhaven is a beloved tactical combat board game where players become wandering adventurers in a gloomy world where motives continually shift. In this thrilling game, your decisions determine how the story unfolds. If you’re looking for games like Gloomhaven, there are plenty of riveting alternatives to consider!

From “Descent: Journey Into The Dark” to “Tainted Grail,” many epic tactical combat board games are available today. In these gripping board games, you’ll be the master of your fate as you explore treacherous new worlds filled with unspeakable terrors.

If you can’t get enough of Gloomhaven, there are plenty of harrowing new realms to explore in one of these great alternatives. Whether you’re looking for a game that focuses on cooperation or one with similar exploration methods to Gloomhaven, we’re sure one of these ten similar games will be the right fit for you!

Descent: Journey Into The Dark Descent: Journeys in the Dark is a board game in which one player takes on the role of the treacherous overlord, and up to four other players take on the role of courageous heroes.

In Descent: Journey Into The Dark, one player transforms into a devious overlord, while the remaining players are the courageous heroes. Throughout the game, the brave heroes embark on various quests to stop the overlord from enacting his treacherous plot.

From venturing into mysterious caves to uncovering ancient ruins, these quests aren’t for the faint of heart. If you’re looking for a game with an immersive story-driven campaign like Gloomhaven, you’ll love what Descent offers players… if you dare! Imperial Assault casts you and your friends into the climactic events following the Death Star's destruction above Yavin 4 and offers two full-game experiences within the Star Wars saga.

If you’re a fan of Gloomhaven and Star Wars, Imperial Assault is the perfect tactical combat board game for you! In this game, you’re thrown into a civil war between the Galactic Empire and the Rebel Alliance. This stellar game offers players two distinct games to play in the Star Wars universe.

By playing Imperial Assault, you can determine whether the elite Rebel operatives have what it takes to overthrow the Galactic Empire. Will you help the rebels defeat the dark side? Or will you decide to join the dark side and get revenge for the destruction of the death star? The country Andor is in danger. From the forests and the mountains, the enemy back to the castle of the old King brandur. Only your little hero Group opposes them.

From the forests to the mountains of Andor, enemies are rapidly advancing toward the castle in Legends Of Andor. Do you and your fellow heroes have the guts to defend the castle of King Brandur and protect Andor from the forces of evil?

In this cooperative game, each hero takes on one of four roles. Whether you’re an archer, dwarf, warrior, or wizard, you’ll have your own unique set of skills. However, you’ll need to work together to successfully defeat the enemy forces to save Andor from destruction! The critically acclaimed, award-winning Mage Knight board game combines elements of RPGs, deckbuilding, and traditional board games while capturing the rich history of the Mage Knight universe.

In Mage Knight, players transform into one of four powerful mages as they explore the Atlantean Empire. As you develop your mage’s abilities and spells, you can fill your deck with powerful actions and spells. Will you use your newfound powers to conquer cities in a dark corner of the Mage Knight universe?

Fans of Gloomhaven will love this board game, which expertly combines elements of traditional board games with deck-building and RPG elements. This is a riveting self-contained game. One thing is certain: players won’t quickly forget their travels in this dark corner of the Mage Knight universe. Mansions of madness is a fully cooperative, app-driven board game of horror and mystery for one to five players that take place in the same universe as eldritch horror and elder sign.

Mansions Of Madness is a survival horror game that draws inspiration from the frightening tales of H.P. Lovecraft. In this thrilling app-assisted board game, which is fully cooperative, you’ll need to go on a harrowing journey through dark and desolate mansions.

What horrors will you uncover as you explore, and, more importantly, do you have what it takes to survive? Throughout this game, you’ll need to overcome mind-bending scenarios, solve puzzles, and battle monsters – all while dealing with an unpredictable game map! In Mice and Mystics players take on the roles of those still loyal to the king – but to escape the clutches of Vanestra, they have been turned into mice.

In Mice And Mystics, the players are those who are still loyal to the king – but there’s a twist! To escape a grizzly fate, you and your comrades have been turned into mice. With a castle that now seems impossibly large, you’ll need to cooperate with other players to save the doomed kingdom.

Each player has a role as vital as the next. Together, you’ll need to warn the king about oncoming threats as you try to defeat the villainous Vanestra. This innovative game is perfect for Villainous fans looking for a memorable adventure! Nemesis is a 1-5 player space survival game with incredible miniatures and clever, immersive rules that include cooperation, bluffing, backstabbing, and all other elements of an iconic science-fiction horror adventure.

Nemesis is a semi-cooperative board game where you and your crewmates must survive on a ship running rampant with nefarious aliens. Will you be a scientist trying to find a logical solution or a traitor trying to escape the ship? Or perhaps a soldier trying their best to survive?

Regardless of your role, your character will become stronger the longer you play this riveting board game. Much like Villainous, you’ll need to complete a unique objective to win the game and defeat the hostile organisms that have infested your ship.

If you love playing through Villainous as the iconic Captain Hook, you’ll love what this narrative-driven game has to offer players. In Sea of Legends, players take on the role of a captain as they swingle their way through this thrilling open-world board game.

You’ll need to defeat enemies, raid ports, and even bury treasure in this game. However, we must warn you: your decisions will create waves altering the game’s outcome. Do you have what it takes to navigate the ever-shifting tides? Shadows of Brimstone: City of the Ancients is a fast-paced, fully cooperative, dungeon-crawl board game set in the Old West, with a heavy dose of unspeakable horror!

Shadows Of Brimstone is set in the titular mining town, with the story taking place against the backdrop of the Southwest in the late 19th century. The town of Brimstone has just discovered mysterious deposits of a new mineral. Even rarer than gold, this new mineral has magical properties.

In this cooperative dungeon crawler, you’ll encounter unfathomable horrors. Will you be a gunslinger, bandit, preacher, or the seemingly innocent saloon girl? Choose wisely since your posse of heroes will need to discover the secrets that lie in the deep mines in this town.

Tainted Grail: The Fall Of Avalon Tainted Grail: The Fall of Avalon

Blending Arthurian legends and Celtic mythology with a unique vision, Tainted Grail allows you to impact the game world in deep and meaningful ways.

If you’re looking for a cooperative adventure like Villainous, you’ll love what Tainted Grail: The Fall Of Avalon has in store for you. However, you can also play this board game as a solo adventurer.

Do you have what it takes to save a land that is being torn apart by conflict as it sinks into the abyss? To make it to the end of your journey in Avalon, you’ll need to overcome violent weather, sickness, starvation, and many more harrowing incidents.

If you can’t get enough of Gloomhaven, there are plenty of fantastic alternatives to consider. In these games, you can explore treacherous new landscapes with friends and foes. As you progress, your choices will determine the fate of these thrilling new lands!