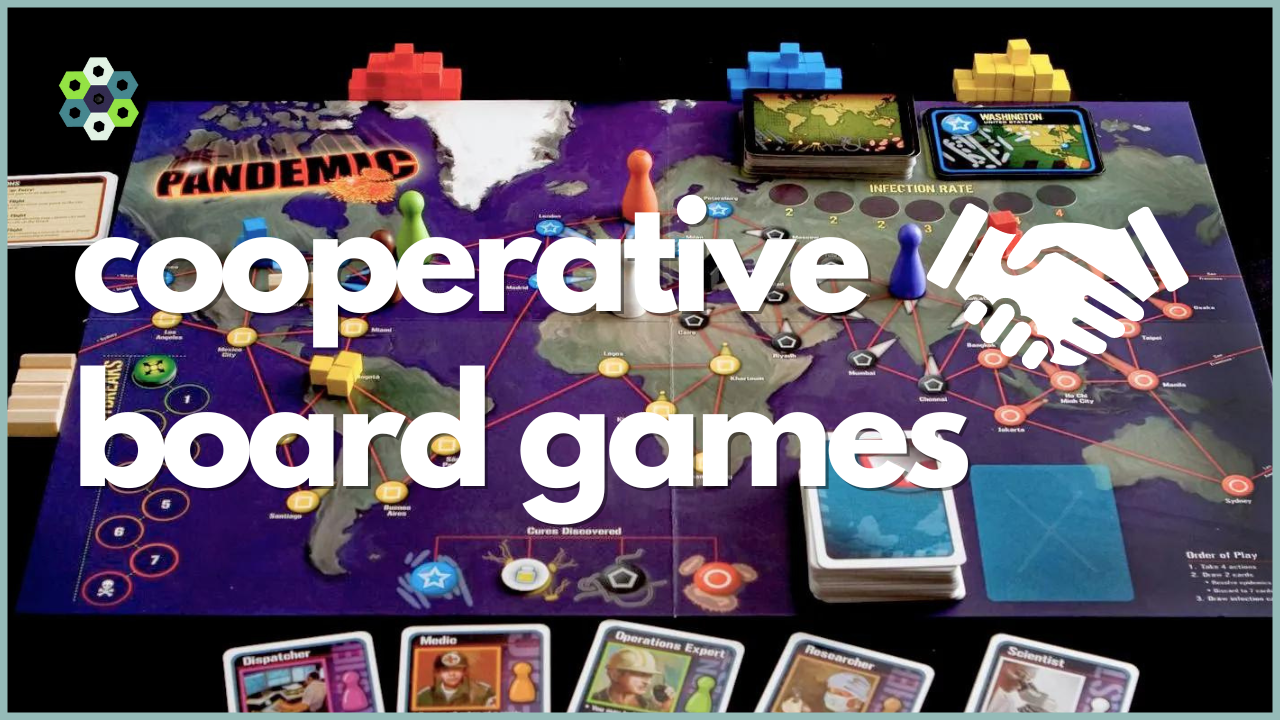 You probably grew up on games like Risk and Monopoly. One player dominates and eliminates adversaries one by one, who are then forced to sit out for the rest of the game. Even gentler games of the era like The Game of Life (groan) and Clue still involved one player emerging triumphant and defeating the others.

That all changed in 2008 with the release of Pandemic. Though there were some cooperative games released in the 1980s, notably Arkham Horror, most of the early cooperative games were educational in nature or represented simplified takes on role-playing games and none were commercially successful enough to capture the cultural zeitgeist the way Pandemic has.

What is a Cooperative Board Game?

All right guys, we can do this. We’re going to play a board game without attempting to destroy each other. Go team!

A Cooperative Board Game is one that focuses on cooperation between players rather than competition. The goal is shared between players and either everyone wins or everyone loses. Though players cooperate with one another, typically an element of competition is still present, but the opponent is the game itself.

In Pandemic, for instance, players fight against spreading diseases threatening humanity and an ever-ticking clock. Wipe out all of the diseases and everyone wins. Let them get out of hand or run out of time and everyone loses. The intensifying plague coupled with the ticking clock and teamwork involved lead to some tense moments reminiscent of a Hollywood thriller.

As with so many categories in Tabletop Gaming today, the lines can be very blurry when attempting to define what is a Cooperative Board Game and what isn’t. Hidden identity games like Secret Hitler and One Night Ultimate Werewolf involve an element of cooperation and sabotage, but in the end, they are still competitive games where players form teams. Battlestar Galactica: The Board Game starts as a cooperative game until one or more players (depending on player count) realize they are Cylons and begin actively trying to undermine the humans.

Take away the hidden identity element and you’ve got games like Axis and Allies where the teams are transparent and compete with each other openly. At their core, as teams work together, these tend to ultimately fall on the competitive side of the scale, rather than cooperative. There are cooperative elements, but winning ultimately rests on defeating other players.

Other games, such as Risk, Diplomacy or even Monopoly may involve temporary alliances where weaker players join forces to eliminate a stronger player. Once that player is neutralized, the alliance inevitably breaks and competition resumes, as there can be only one winner in these winner-take-all type games. Not quite cooperative in the end.

Role-playing games deserve a special mention here, as many are fundamentally cooperative in nature. Where they fall short of the definition of Cooperative Board Games is that they are arguably not board games in the traditional sense, but something like a hybrid between a board game, a choose-your-own-adventure book, and a video game. The structure is much looser and more speech-based than traditional board games. Once again, the lines get extremely blurry at times.

Players who like the social aspect of board games, but shy away from the intense competition are in luck, as cooperative board games are practically made for them. In addition, people who enjoy collaboration and working together with others will likely enjoy these games more than the strictly competitive variety.

Cooperative games also tend to be great Gateway Games, as experienced players can help newbies with their turns and they will not be crushed by an overly-competitive player on their first go-around. Give it a shot, it may just get your non-gamer friends on board with the Tabletop lifestyle.

Hardcore competitors. We’ve overheard more than a few people reply with something along the lines of “Why would I play that if I can’t win?” after having the cooperative concept described to them. For these players, the joy of board gaming comes from the blood-lust of crushing competitors and asserting dominance, rather than the joy of playing. That’s fine, but this is not the genre for them.

In addition, some people are not hyper-competitive, but they don’t tend to enjoy working in teams. These are the people who hated group projects in school. For some, discussing and debating feels like a chore, and they feel like they could make better decisions on their own. These are not the ideal players for cooperative games.

Who Will Ruin Cooperative Games

Overly dominant players can make a cooperative game miserable for more timid players. If playing with a mixed group like this, it’s important for everyone to remain self-aware so that the entire team is contributing and the game doesn’t turn into a one-player experience.

Cooperative games almost always make for excellent solo and two-player experiences. Even if the box states more players are necessary, they can often be adapted for a low player count with no real modifications. Players just take on multiple roles and play as a solo or small team.

Cooperative games make excellent Legacy Games. If you’re not familiar, check out our resource page on Legacy Board Games, but in a nutshell, Legacy Games are ones that are played multiple times with each game’s outcome affecting permanently affecting the next.

Since Legacy Games require the same group of people (usually) to play a game over and over, competitive games need some adapting to work. A competitive game like Risk Legacy can get a bit out of balance if one player dominates several games in a row. Cooperative games neatly solve this problem by having everyone work towards the same goal each time.

Pandemic Legacy contains a brilliant balancing strategy where the game gets a little easier each time the group loses and a little harder each time they win for a nail-biting, but not frustrating experience every time. It fosters a sense of struggle and triumph over adversity that makes you feel like you’ve been to war with your group and the comradery becomes far more real than a typical one-and-done board game.